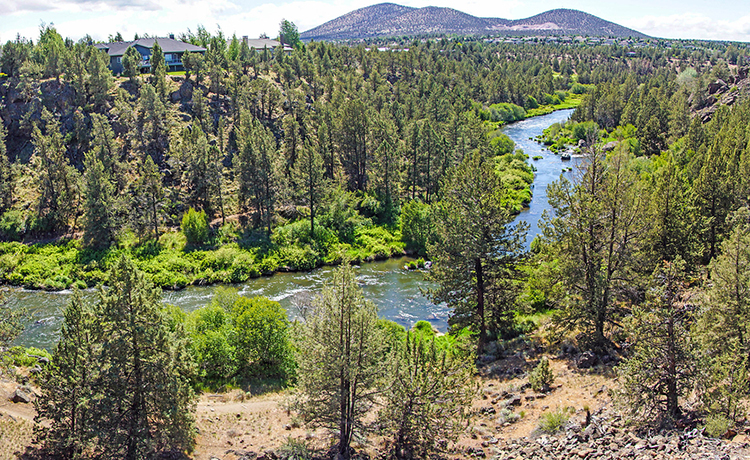 When looking for what’s around Redmond Oregon, you should first know that Redmond is one of Oregon’s top growing cities and that’s much in part due to its central location. So what is around Redmond, Oregon? The short answer: a lot. From incredible geographical features to surrounding cities to revitalization plans, here’s why Redmond is getting a lot of attention right now.

To the east of Redmond lies the expansive high desert dotted with local flora and fauna, and plenty of trails to walk, hike, or bike. The high desert provides ideal opportunities for hunting, camping, and other outdoor activities. To the town’s north lies Smith Rock State Park. As Oregon’s premier climbing destination, rock climbing is the most popular. Visitors can also enjoy hiking and biking in Smith Rock’s rugged canyon. A short drive away runs the Crooked River, famous for fishing and rafting. To Redmond’s south lies the city of Bend where visitors can recreate along the Deschutes River, visit breweries, and experience downtown. To Redmond’s west lies the impressive Cascade Mountain Range that includes Mt. Bachelor, the North and South Sisters, Broken Top, and more. With its multitude of lakes, rivers, and trails, there is no shortage of varied recreational opportunities in the Cascades.

Redmond is known as the hub of Central Oregon for good reason. As home to the region’s only airport, visitors from around the country will arrive first in Redmond. Direct flights come in from Denver, Phoenix, Los Angeles, Seattle, Portland, San Francisco, and Salt Lake City. With a modest population of 27,000, Redmond is the starting point for many adventures but is also home to many happy Oregonians. In fact, Redmond is currently seeing a revival of sorts with the addition of businesses, restaurants, brewpubs, and new development. Downtown Redmond recently finished Phase 1 of its revitalization efforts by completing 6th Street construction and is starting on Phase II which includes entertainment plans and new housing. The future of Redmond means bringing new life to a town with plenty of history.

Prairie Crossing is a new home development just south of Redmond’s downtown, easily accessible via Highway 97 connecting everything that surrounds Redmond Oregon. Whether you head out east toward the high desert, north into Smith Rock, south to Bend, or west to the Cascades, Prairie Crossing can be your starting point.

Our model home will be cleaned and sanitized prior to each viewing with an emphasis on doorknobs, light switches, etc. to ensure the safety of our buyers and team! If you have any questions, or would like to book an appointment, contact us at legacyrealtyteam@gmail or 541-504-9000.